Pumpwell Flyover: 22 Things to Know About the Unending Marvel of Mangalore

It’s a flyover, that even after ten years in the making still lies unfinished and inspires tons of memes, jokes, songs, films, prank calls; it has its own birthday, social media presence and a goddamn google profile.

For some it’s a piece of art and for others it’s the symbol of patience of the people of Mangalore. In this article we list 22 things to know about this never ending marvel of Namma Kudla.

All details presented here are sourced from various websites on the internet, we have tried our best to kept all the information as factual as possible but there may be some mistakes. If you do spot one email us on contact@nostoryleftbehind.com and we’ll get to it right away. Thank you.

1. The flyover had been sanctioned ten years ago. 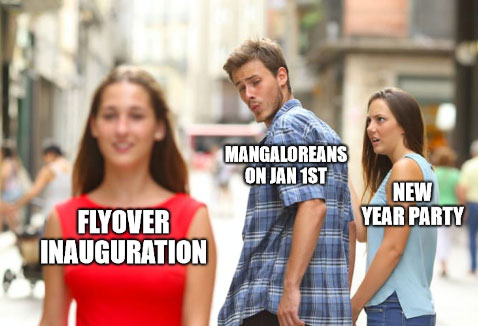 In 2009, under the UPA 2 government, the project for making this flyover was given the green signal from the phase III of The National Highways Development Project (NHDP) to the ‘Navayuga Udupi Tollway Pvt. Ltd.’ (NUTPL), a company that is registered in Hyderabad. 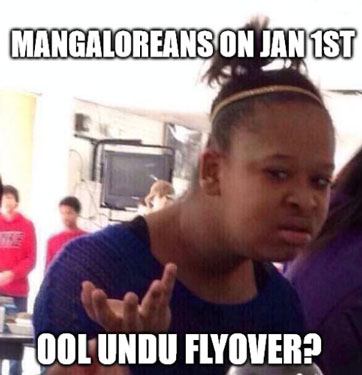 For those thinking the flyover must have been several kilometers long to take this long — no, it’s not! It’s just a 100 meters short of a kilometer.

In comparison to this mere distance, the Danyang-Kunshan Grand Bridge in China, a part of Beijing-shanghai high speed railway, spans 165 kilometers in length and took only 4 years to complete.

If math was to be done here then the Chinese bridge would have taken 1650 years to be completed by our flyover’s standards, this, assuming the flyover actually gets completed in the first week of January 2020!

3. The flyover comes under the Talapady-Kundapur National Highway Project. 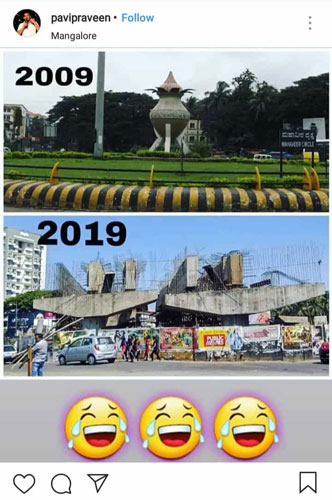 The flyover project comes under Talapady-Kundapur National Highway 66 project. The total length of road developed under this project would be 90 kilometers and would also include other flyovers, underpasses and service roads.

Once “completed” you could cover the 110 kms from Talapady to Kundapur in 80 minutes, on speeds ranging from 80 to 100 km/hr. NUTPL will manage the project till 2035 as per the agreement.

4. The estimated cost of the project was Rs 671 crores.

This is the estimate for the entire four laning of Kundapur – Talapady road project and the price tag is from 2010 when the project had just commenced.

5. It is located at a major entry and exit point of the city!

This eyesore is the first thing visitors from Bangalore and Kerala see when they enter the city. Its original purpose was to ease traffic at such an important junction but all it has done from the last 10 years is worsen it! 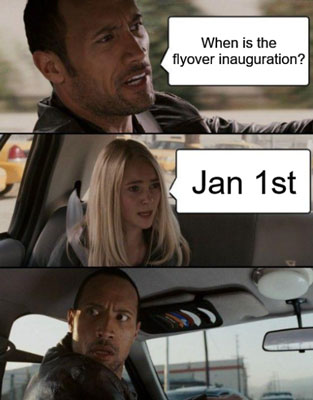 Even before its completion there seems to be problems with the construction! A team of fact finders found out that the height of the flyover is only 4.5 meters rather than the national and international standards of 5.5 meters.

This has cartoonishly resulted in large trucks getting stuck underneath it and requiring that the air from their tires swooshed out in order to make room for their release.

Not only that the fact finding team of the Forum for Justice (FFJ) also found out that two pillars one on the eastern side and one on the western had sunk. 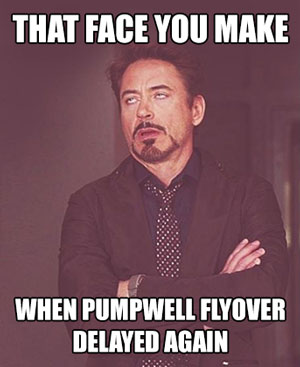 The Thokkutu flyover and Pumpwell flyover are both the part of Talapady-Kundapur national highway project. Located only 6 kilometers away the Thokuttu flyover was inaugurated finally on June 13th 2019 after a wait of 8 years. 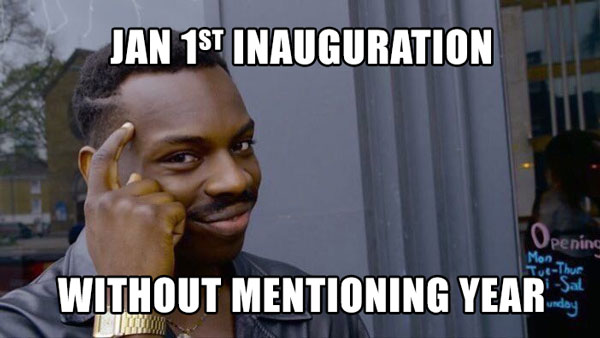 The project is far away from completion but the toll is getting collected from 4 different places, this, in spite of the bad roads, numerous potholes, unsafe bridges and an incomplete flyover. Gosh!

These numbers are for the entire Talapady-Kundapur national highway project to make room for the good ol’ future.

11. It was mock inaugurated by PM Modi. 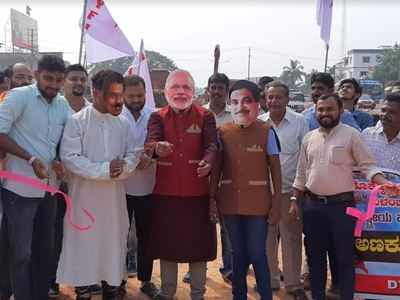 Yeah that happened and he was also joined by the then Union Minister for road transport and highways Nitin Gadkari and the local MP.

12. It even had its own birthday party.

Most probably the only flyover in the world that had its birthday celebrated. 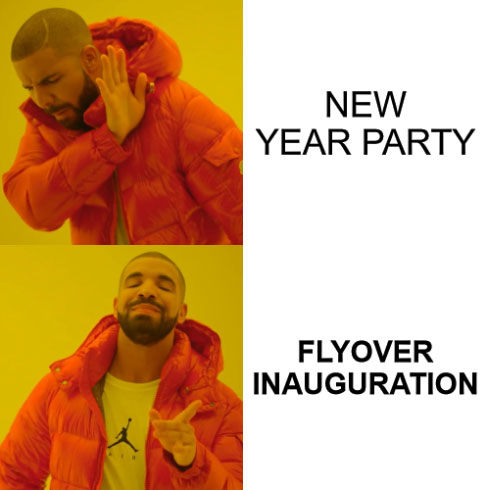 Quite possibly the best thing to come out of this whole mess are the memes. People of Mangalore have found a new way to vent their anger via memes. The local MP is largely the target of many memes.

Rather than have them all in one place we’ve scattered them throughout the article.

This song in Tulu has the singer inviting people over to the flyover’s inauguration, the clip has the voice of the local MP and some dialogues from a popular Tulu film.

15. Stand up comedy? The flyover has got it too.

This prank went viral and then found its way to YouTube as well. 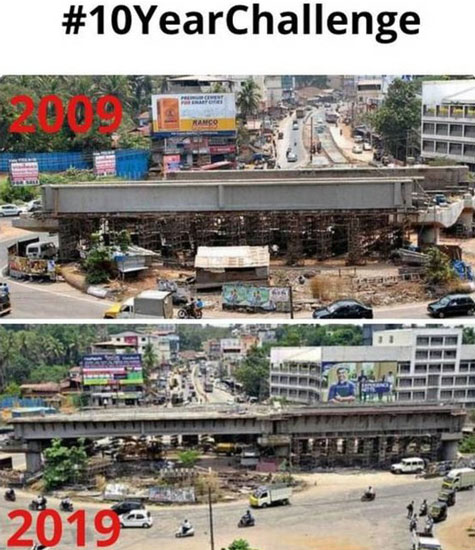 20. Even Google knows about this unending mayhem.

This is what you are going to get when you google its name, even it know what’s up!

21. It was supposed to have its own kite festival for crying out loud! 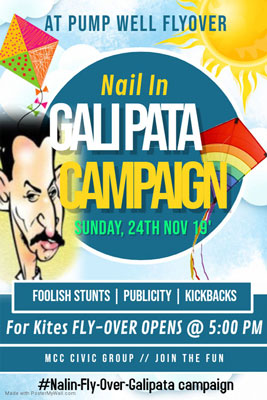 To protest for the delay on the completion of the flyover the activists wanted to fly kites with local MP’s face on them. But unfortunately the police denied the activists their chance at hitting The Man with some good ol’ wit just a day before the event.

22. It is now to be inaugurated in the first week of January.

Or so says the MP. All we can do is wait and watch.

With this we have come to the end of this phenomenal story ten years in the making. But we hope that for the people of Mangalore it doesn’t take any more time.