Karnataka Political Crisis: How much is being spent on the “nataka” in Karnataka and Who is paying for it?

A lot has been said and discussed about the ongoing political situation in Karnataka.

Whose with who? Who resigned today? Whose with them? Who are they going with? Where are they headed to?

News outlets have answered these questions and they continue to do so. They’ve even covered what the congress strongman Mr DK Shivakumar ate and drank while waiting outside the Renaissance hotel in Mumbai.

But we found one crucial aspect missing from these reports – the Cost. Crores have been spent putting up MLA’s in luxury hotels and flying them in and out on Chartered planes.

Of course, we cannot give you the exact figures, that is something we might never know. But what we can do is tell you is how much it costs to stay in those hotels along with chartered plane costs.

The details in here are sourced from various news reports. We’ve tried to be accurate but there could be mistakes. If you do spot one please let us know in the comments.

We’ll first begin with the resorts and hotels. All three parties have booked the finest luxury hotels for their MLA’s.

The rebels have been staying at the 5-star Renaissance hotel in Povai, Mumbai. As per their website, their cheapest room – The Superior Room is priced at Rs 9984 while the Presidential Suite, their most expensive one is Rs 44,800. Both rates are tax inclusive and for a 24-hour period. 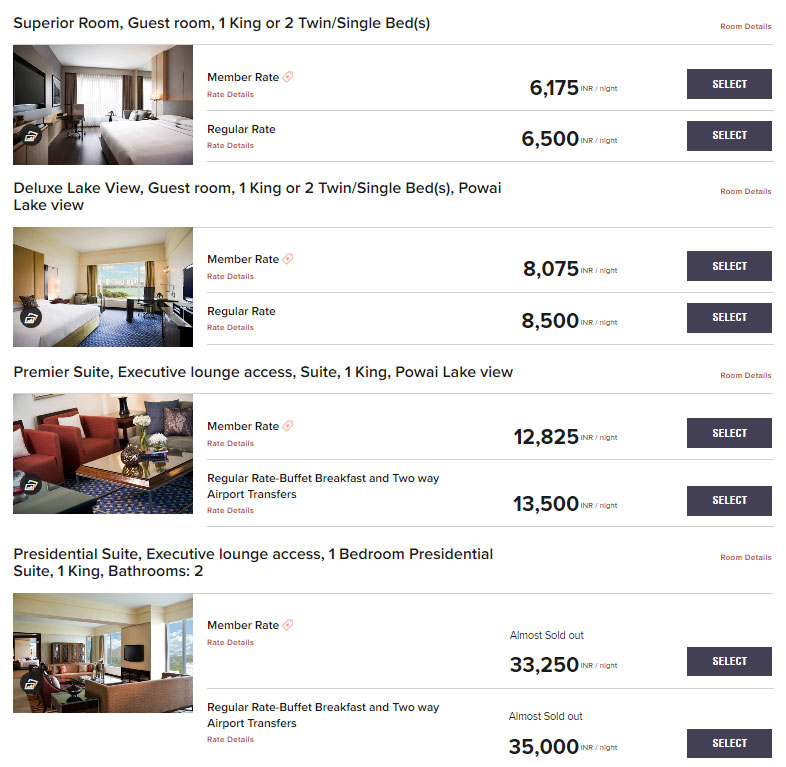 Tax exclusive room prices at the Renaissance hotel in Mumbai.

They are expected to stay there till the 19th.

The Congress party MLA’s are residing in two hotels. About 40 of them are at Clarks Exotica Convention Resorts and 20 were at the Taj Vivanta in Yeshwantpur and later moved to the Windflower Prakruthi resort in Devanahalli.

Room rates are as follows,

They are expected to stay there till the day of the trust vote.

Update (July 16): The Congress party moved their MLA’s from the Taj to Windflower Prakruthi resort in Devanahalli. 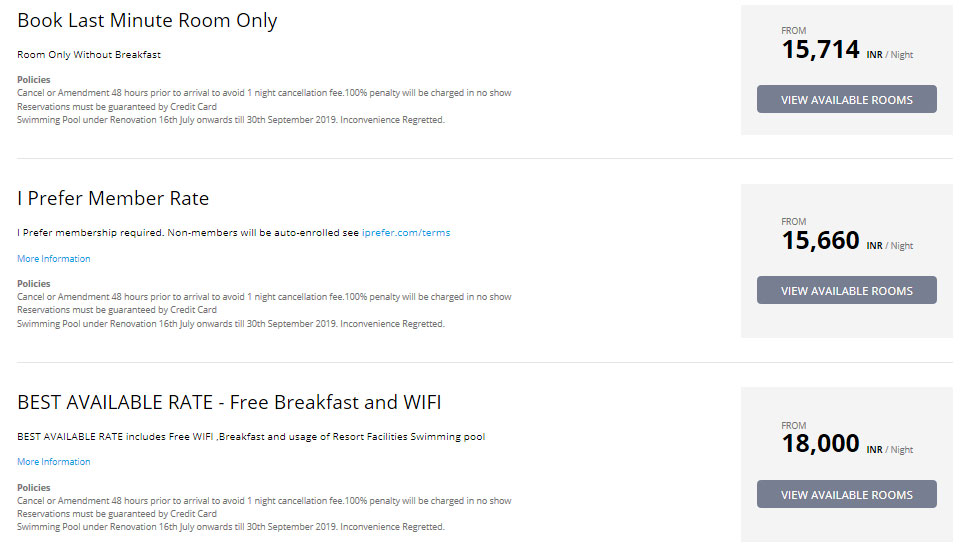 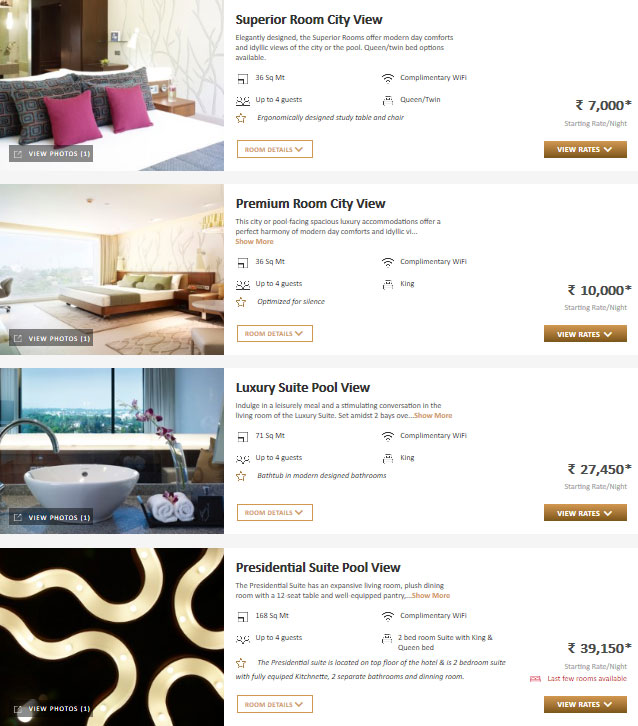 Tax inclusive rates at the Taj Vivanta in Yeshwantpur 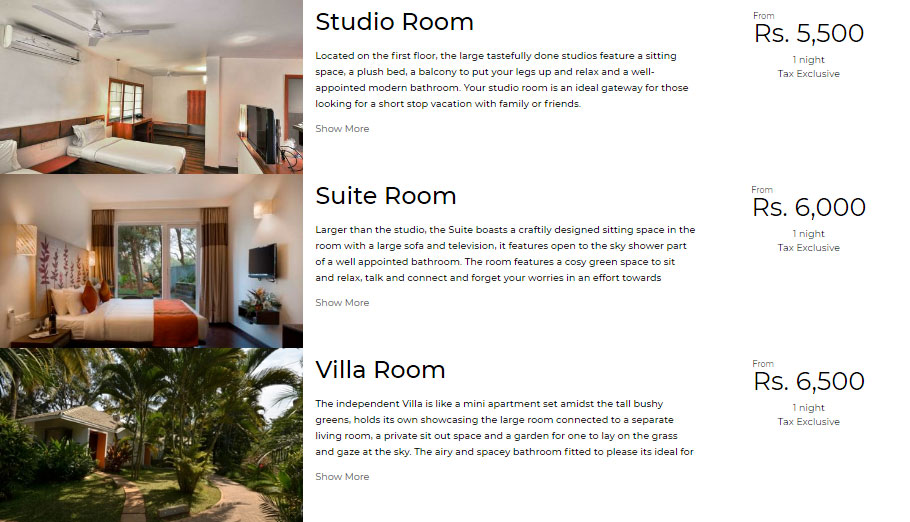 The BJP moved 100 of its MLA’s to the Ramada resort at Yelahanka. Room rate per night at the Ramada is Rs 6765 inclusive of tax.

It looks like that BJP went cheap compared to the rest! 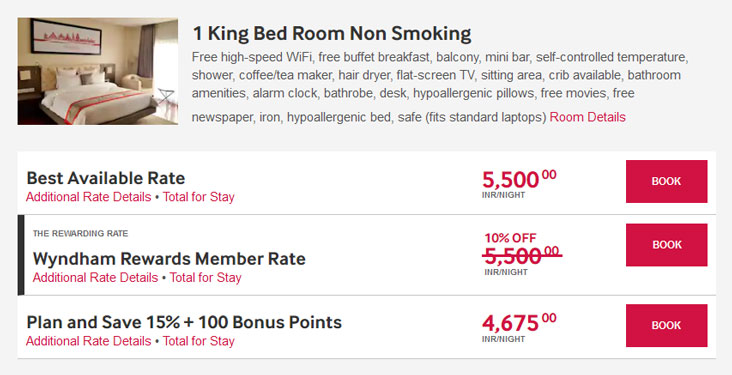 Tax exclusive rates at the Ramada resort in Yelahanka

The JD(S) is keeping its MLA’s at the Golfshire Resort near Nandi Hills. The resort has luxurious villa’s priced at Rs 15,500 a night. Each of these villa’s has 4 bedrooms and wide range of amenities. A senior JD(S) functionary said “We have booked 34 rooms there. Except for chief minister and a few others, about 30 MLAs are staying there.”

Tax inclusive rates at the Golfshire resort as found on Expedia

Most of the traveling has and continues to be done by Chartered planes. Each such trip is said to cost upwards of Rs 4,00,000 and they have been used several times. And we think it is safe to assume that the planes were on standby the whole time further adding to the cost.

July 6: Rebel MLA’s submitted their resignation to the speaker and hopped on a Chartered plane to Mumbai.

July 7: CM HD Kumaraswamy arrived in Bangalore from the USA on a chartered flight. According to officials this flight cost Rs 12 lakh and was borne personally by Mr Kumaraswamy.

July 11: About 10 rebel MLA’s travel to Bangalore from Mumbai by two special flights to meet the Assembly Speaker.

July 12: They travel to Bangalore to meet Karnataka Assembly Speaker KR Ramesh Kumar to resubmit their resignation and return back to the Renaissance hotel.

July 13: Few of the rebel legislators board a chartered plane from Mumbai airport for Shirdi temple darshan.

July 14: One of the rebels, Hoskote MLA Nagaraj who first agreed to reconsider his resignation surprised everyone by boarding a flight to Mumbai in the company of BJP leaders.

There may be more, but these are all we could find reported.

Excuse us for the title – nothing else came to mind!

We’ve only discussed Hotel and Chartered planes so far in this article but the most amount of money has been spent to get MLA’s to switch loyalties. As per a report in the Times of India each MLA has been paid about 20 crores to trade sides.

Security cover has been provided to all Hotels and Resorts where the MLA’s have been staying.

Heavy security cover that includes the Maharashtra State Reserve Police Force and Riot Control Police have been deployed at the Renaissance hotel after the rebel MLA’s wrote to the Mumbai police.

Security has also been provided to airports during the departure and arrival of MLA’s.

Apart from the flights there’s also the vehicles used to transport scores of MLA’s in and out of the resorts and hotels. From what we see, most parties having been using luxury AC buses escorted by staff and police cover.

All the parties involved have hired senior advocates to represent them in the Supreme court. These are some of the best lawyers in the country who charge few lakh rupees per hearing.

Whose paying for all this?

This is the third time that the legislators have been put up at resorts in the last 14 months.

The Congress has accused the BJP of orchestrating the whole affair and funding the stay of the rebel MLA’s. It has pointed out that the plane used to take the MLA’s to Mumbai belongs to a company associated with Rajeev Chandrasekhar who is a Rajya Sabha member from the BJP.

The BJP, quite predictably, rejected all allegations while asserting that the cost of the Hotel stay is borne by the MLA’s themselves.

Meanwhile, the Congress party has said that it will bear all the expenses of the hotel stay of its legislators and has asked them to utilize all services available.

JD(S) MLA from Malavalli K Annadani said that party legislators are personally funding their stay at the resort for the sake of the survival of the government.

We hope we’ve been able to give you a slight idea of the costs involved in doing resort politics. As we’ve said before we might never know the real costs so such rough calculations is all we can do.

So when in a few days when all of this blows over and a winner is declared we’ve got to ask one question,

Are we going to do something about this or do we let the “nataka” go on?